When To Be Concerned With Eye Floaters 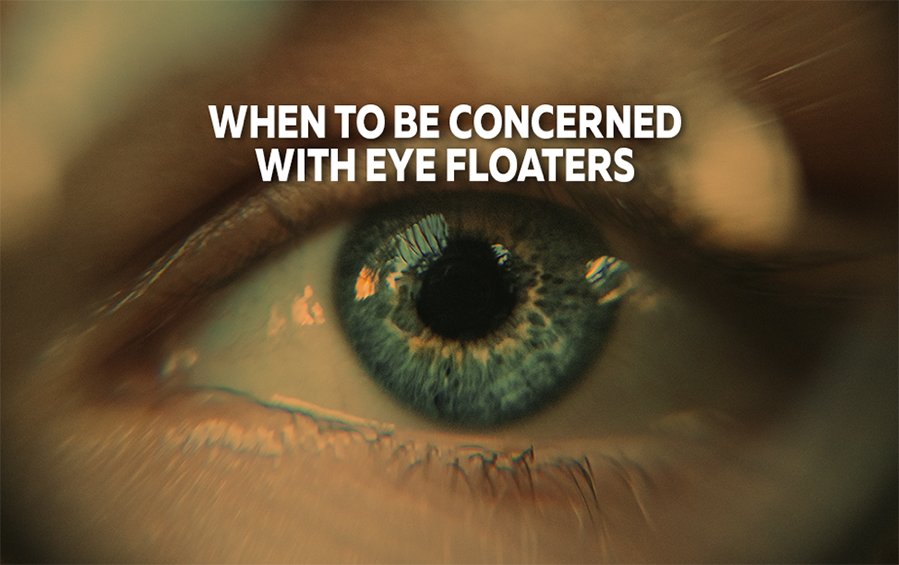 Eye floaters are gray or black specks, cobwebs, or strings that drift around your eye. When you try to look at them directly, they seem to dart away. Floaters are often caused by age-related changes in the eye.

There’s a jelly-like substance in our eyes called the vitreous that becomes more liquid the older we get. Tiny, microscopic fibers in the vitreous clump together and cast a shadow on the retina. It’s those shadows that you see that are the floaters.

Floaters can be dark specks or transparent, knobby strings. They show up when you aren’t trying to focus on them or when you look at a bright, plain background. It’s tough to look directly at a floater because they move out of the way when you change your focus. Eventually, the specks or string settle down and slide out of your line of sight.

There are a variety of different events that can cause eye floaters, including the following:

Age-related eye changes. The vitreous becomes partially liquefied as you age. As it shrinks and sags, it also clumps together and gets stringy, which blocks the light as it passes through your eye and casts a tiny shadow on the retina. These shadows become floaters.

Eye medications and surgery. When some medications are injected into the eye, it causes air bubbles to form. These bubbles cast shadows on the retina and are viewed as floaters until the body absorbs them. Adding silicone oil bubbles to the vitreous during some surgeries also causes floaters.

Bleeding in the eye. Injury, blocked blood vessels, diabetes, and hypertension can all cause bleeding in the vitreous, and the blood cells are viewed as floaters.

A torn retina. As the vitreous sags, it pulls on the retina and could tug hard enough to tear it.

When to see a doctor

Most of the time, floaters are harmless. They may increase slightly as you age, but they are only slightly annoying rather than a threat. There are some cases where they do become a threat, and that’s when you should immediately contact a doctor.

If you experience more floaters than usual, there are suddenly new floaters, flashes of light occur in the same eye as the floater, or darkness appears on any side of your vision, you should contact a professional immediately. These could be a sign that the retina has torn or perhaps detached, and that can be a threat to your sight that requires immediate attention.